How A Beneficial Insect Helps Protect Our Garden

In 2013, my sister and I have discovered a new beneficial insect in our garden. I had noticed a large number of wasps flying over our garden beds. I didn't recognize this variety of wasp. They kept flying closely over the surface of the garden, landing periodically, and then disappearing down into the soil.  They did not act aggressive at all. I was able to work in the garden nearby without disturbing them.

We finally identified this insect as the blue-winged wasp (Scolia dubia). This wasp is a parasite of the grubs for both the June beetles and Japanese beetles. They dig down into the dirt, find a grub, and sting it to paralyze it. She then constructs a cell around the paralyzed grub and lays an egg on the outside of the grub. When it hatches, the wasp larva will then feed on the grub, overwinter in the soil, and hatch out as an adult wasp the following year.

The adult wasps feed on nectar. This harmless wasp will only sting if it is pinched, caught, or is seriously threatened. They are attracted to large concentrations of grubs in the soil.

In 2012, we had a major problem with large June beetle grubs. They did significant damage to our sweet potato tubers.

Surface damage to sweet potatoes, caused by the grubs of June beetles. After cutting away the damaged portions, we were still able to eat most of these tubers.

They have even chewed into winter squash lying on the top of the soil. 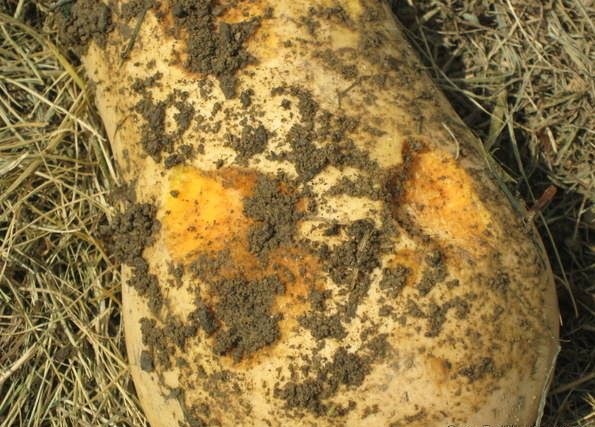 Starting in 2013, we protected our sweet potato beds by covering them with lightweight row cover

during the several weeks that the June beetles were flying around and laying their eggs in the soil. This did an excellent job in keeping our sweet potato tubers grub free! However, when we were harvesting other crops in August 2013, we again discovered large numbers of June beetle grubs in some of our unprotected beds. My sister collected over 100 large grubs from less than 12 square feet of garden space. Yikes! 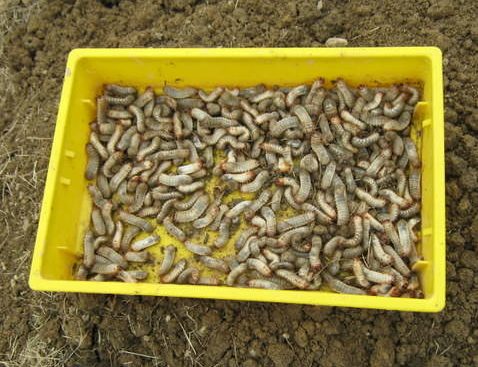 Fortunately, we're able to make good use of these grubs by feeding them to our chickens. Our chickens love grubs, and they're an excellent source of protein and fat. Unfortunately, our bantam Orpington hens don't seem to be interested in scratching deep into the soil, or we would put them directly on our garden beds to hunt for the grubs themselves.

This was the first time in over 30 years that I had to deal with a major grub problem in my garden. Our garden was less than two years old in 2013, and we had purchased the soil to fill the beds. I suspect there was something about this imported soil that was particularly attractive to the June beetles.

These blue-winged wasps will help to control our June beetle infestation, but they will probably only offer partial control, given the large numbers of grubs we are currently dealing with.

We plan to continue to use row cover to help protect some of our more vulnerable crops – like the sweet potatoes. We will also collect the June beetle grubs to feed to our chickens – at least until we see the wasps arrive in large numbers in August. After they show up, we don't want to disrupt the good work they are doing in our garden.

We are slowly improving the habitat in our yard to encourage more beneficial insects. As we continue to improve our soil over time, we also hope that our garden will become less attractive to these beetles.

Take what steps you can to encourage beneficial insects to your garden. Closely observe the various insects that you find. Don't assume that a new insect that shows up in your garden is a pest. Take a close-up photo or collect a sample, and have it identified. Your local Cooperative Extension office or Master Gardeners can often do this for you.

You, too, can feast year-round from your small backyard!