Tips for Choosing and Planting Potatoes in Your Garden

Tips for Choosing and Planting Potatoes in Your Garden 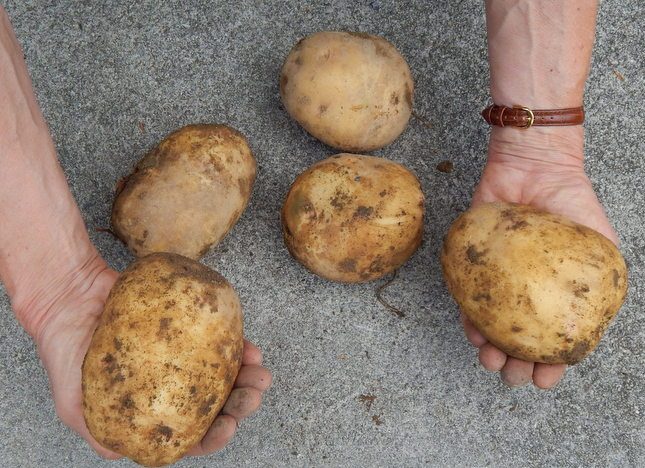 Do you wonder if it's worth growing potatoes in your garden?  You might not think that home-grown potatoes taste much different from store-bought.  However, if you conduct your own taste-test, you might be surprised!

My sister and I compared our home-grown Yukon Gold potatoes with the same variety bought from the store (doing a blind taste-test), and we were stunned how much better our own potatoes tasted.

Choose What to Grow

How do you decide which varieties to grow in your own garden? There are literally hundreds of varieties of potatoes to choose from. Some are best for mashing, baking, boiling, or frying. Others can be successfully cooked in a variety of ways.

Some potatoes mature very early (under 90 days), while others need to grow in your garden all season long.  Some types store well, and others don't. Some varieties are resistant to common pests and diseases.

And there are a wide variety of colors and flavors to choose from! I used to grow several varieties at a time, so that I could compare them. Sometimes you can purchase several varieties of potatoes at your local farmers market so you can find out how they taste.

Where do you find all these different types?  Mostly through the internet or by mail. Many seed companies are now offering some specialty seed potatoes, too.  Here are some resources for learning more about the different varieties:

Plan to Use a Potato “Tower”?

Some people increase the yields of their potatoes in small spaces by growing them in “towers”. This involves using some kind of deep container, planting the potatoes a few inches above the bottom, and then regularly adding more soil – “hilling up” the potato plants as they grow.

The theory is that the potato plants will continue to grow more potatoes all the way up their buried stems, resulting in a huge harvest in a small area. I don’t know about you, but I didn’t have much luck when I tried doing it. But one of our members, Mary Gene, explained the importance of using the right varieties of potatoes for this method.

Many late season potatoes, such as German Butterball and Katahdin, are indeterminate types, and can be more productive in a “tower” – though I personally think some of the extremely high yields quoted for towers are pretty unrealistic. There is a limit to how much you can increase yields by hilling up even an indeterminate potato plant.

Hilling up a plant involves burying young leaves, and leaves are needed to produce food to grow the tubers. So don’t go overboard on hilling if you want to try this method!

When Should You Plant Potatoes?

Potatoes are cool-season plants that prefer to grow in cool, damp weather, but they don't tolerate a hard freeze. It's best to plant them about 2 weeks before your last hard freeze, as long as your soil has already warmed up to at least 50 F (10 C).

You can harvest your potatoes up to 2 weeks earlier if you “chit” them before planting.  This involves setting the seed potatoes in a warm, bright location for 3-4 week before planting. They will start growing short, stubby shoots, which will give them a head-start after you plant them in your garden. Chitting is not necessary, however.

Cuting Up Your Seed Potatoes

You can grow more potato plants from your seed potatoes if you cut them into smaller pieces first. However, some varieties, like Yukon Gold, produce a larger harvest if their small seed potatoes are planted whole. I often choose to plant small to medium potatoes whole.

Plant them 2-3″ deep (2.5-7.5 cm) in the soil, spaced 12-18″ (30-45 cm) apart, and be sure to hill them up with soil or thick mulch as they grow, to keep the sunlight off the shallow-growing tubers.  Some varieties, like Caribe, will grow huge “lunker” potatoes (like those in the photo above) if they are spaced too far apart. Those varieties should be spaced only 12″ apart, if you don't like lunkers.

Can you plant them on the surface and just bury them in mulch?  Yes, you could.  Some people have great luck with that method.  However, studies have shown that potatoes grown this way usually yield less (up to 30%).

Also, in my experience, tubers not growing under the soil are often eaten by voles. I've lost too many potatoes that way, so I plant my potatoes under the soil in my garden beds, and then keep them well-mulched until harvest.

What varieties of potatoes do you like, and which growing method has worked well for you? I'd love for you to share your own experience in the comments below!