I had an early start with cutworm problems this year – in my hoop house! They must have moved in last fall, before we sealed up both ends with plastic. Take a close look at the green onion plants in the photo above.

I suspected that cutworms caused this damage, although I don’t usually see this kind of damage so high above the soil or on plants this large. Cutworms do their dirty work at night. They hide under plant debris or in the soil during the day. They usually cut down young seedlings in your spring garden. Some people blame all of this type of damage on rabbits, when some may be caused by cutworms instead

I gently dug around in the soil of this Smart Pot container, looking for this pest. I didn’t find any. But I found new damage every morning. So I finally checked one night after midnight. I used a flashlight to look over my onion plants very carefully. At first, I didn’t see them. I finally spotted two of them – one large and one small. If they are disturbed or have bright light shined on them, they will drop to the ground and curl up into a ball. 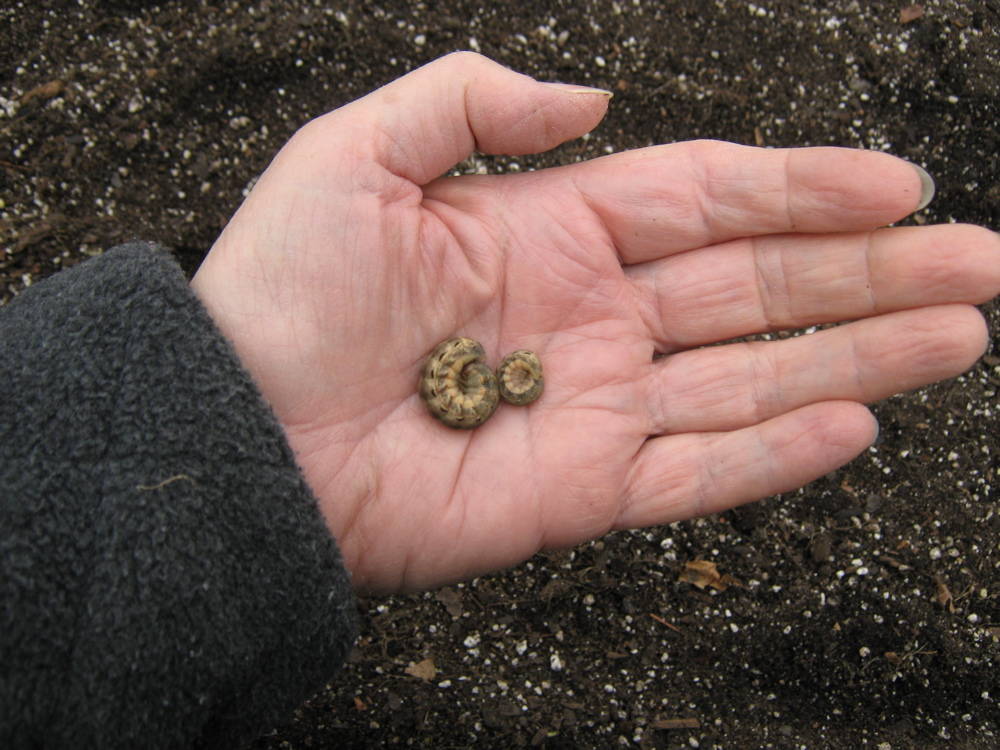 Cutworms are not “worms” or even grubs, though they may look like them. They are caterpillars of certain moths. Many varieties are found around the world. Apparently, these cutworms in my hoop house are one of the climbing varieties. Most cutworms just chew or cut through the stems of young seedlings at ground level – often tomatoes, peppers, beans, cabbage family plants, and more.

Cutworms are a common problem for many gardeners, but I have to say that I never ran into so many of them until I moved to my current home. Instead of just being an early spring pest, I now have to deal with them both spring and fall, and in larger numbers than I’m used to. What has really surprised me is how often they get into my garden containers – even my waist-high containers! I had never come across the climbing variety before.

Most gardeners can prevent cutworm damage by putting “collars” around their young plants, usually made from cardboard tubes or metal cans. You need to push the bottom end an inch or two into the soil, with the top end of the collar a few inches high above the soil. I also used to prevent most cutworm damage by just tucking three toothpicks vertically (partly into the ground) up tight around each stem. This prevented the cutworm from chewing all the way around.

But, neither of these methods work with my climbing type of cutworm. I will continue to look for cutworms in the surface of the soil within a foot of freshly damaged plants.

I’ll also make sure to grow a few extra transplants for possible replacements, if the first seedlings I plant are mowed down. Unfortunately, cutworms can also migrate into my garden from the neighboring lawn area. We’re still working on attracting more beneficial insects to our new gardens – those that will attack our pests. If necessary, after we plant the garden, I’ll do a few night patrols with a flashlight to collect the culprits – and turn them into free chicken food!