Although gardeners often harvest a few potatoes when they’re very young, as new or baby potatoes, most are harvested for long-term storage in the fall.  Don’t worry if you don’t have a perfect root cellar to store them in.  It’s not too hard to store potatoes for several weeks or months, even if you don’t have ideal storage conditions.

When to Harvest Them

You can harvest storage potatoes anytime after the potato plants die down, indicating that the potato tubers are full-sized. If possible, it’s best to wait at least 2 weeks before harvesting them, so that the potato skins have had a chance to toughen up first.

When you harvest early potatoes in early summer, you want thin, tender skin. But for long-term storage, it’s best to allow the skin the thicken and toughen up naturally before harvest. Test a couple of potatoes.  If you rub the potato skins with your thumb, and the skin peels off, wait another week or two before harvesting – unless freezing weather threatens to arrive sooner.

Mature Irish potatoes normally stay dormant in the soil for 4-8 weeks after the plants have died back. After that, the tubers can start sending up new sprouts, especially if the fall weather has turned cool and moist.

Don’t wait too long to harvest your potatoes in autumn. You don’t want them to start sprouting again, or to become damaged by hard freezes. Light frosts won’t damage potatoes buried underground, but you want to harvest them before the soil starts freezing. It’s easiest to dig them up when the soil is moist, but not wet from a heavy rain.

How to Harvest Them

If your soil is very soft, you can often find and harvest the potatoes with your bare or gloved hands.  We usually use a garden fork, inserting the tines straight down at least a foot away from the first plant, and then slowly working our way through the bed. No matter how careful you are, you will always end up nicking or splitting a few tubers. Just eat them first. 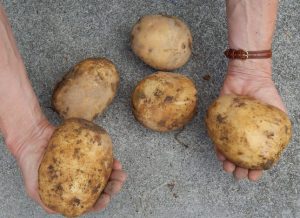 These are a few lunker (extra large) Yukon Gold potatoes that we harvested in August. It’s important to handle your freshly harvested potatoes gently.

Some varieties produce tubers as far as 12-18 inches from the mother plant, while others will cluster the tubers near the base.  Most tubers are produced above the seed tuber that you planted underground in the spring, but I’ve sometimes found mature tubers 6-10 inches deep.  So be sure the check the soil thoroughly in your potato garden bed.

Be gentle and careful when digging up potatoes. Don’t toss them around – place them gently where you want them.  Any damaged or bruised tubers won’t store well, and should be eaten before the undamaged ones.  Unwashed potatoes store best, but if they are very muddy, gently wash the mud away with a hose (don’t scrub them) and let them air dry before storing them.

Discard or compost any potatoes that you’ve found exposed at the soil surface with green patches on their skin. Green skin indicates that the entire potato has developed toxic glycoalkaloids. Cutting away the green patches doesn’t remove the toxin from the rest of the tuber.  Throw away the entire tuber.  Also throw out (don’t compost) any tubers that show signs of rotting – a possible sign of disease.

It’s important to not expose the potatoes to light for more than 24 hours, as they will start creating the toxin. You can air-dry your potatoes in the sunlight for a few hours after harvest, but then store them away in complete darkness.

How to Store Them

Late varieties of potatoes (those that take the full season to mature) are often well-suited for storage, though some are better keepers than others. Late varieties mature just before the weather gets cold, and they won’t loose dormancy and start sprouting again before they are harvested.

It’s trickier to try storing early potatoes.  Our favorite variety is Yukon Gold, which is a very early type.  In our climate, they mature by mid-July.  If we try leaving them in the ground until October, when most potatoes are harvested here, they lose their dormancy by September, and end up sprouting and re-growing in the garden bed before harvest.

Potatoes store best at around 40 degrees and high humidity.  Well-designed root cellars are usually the best way to store them, though I know of a few gardeners in zones 8 or 9 that just leave the potatoes in their gardens over winter, under mulch, and dig them up when needed. Not everyone has a root cellar (we don’t), but you can often find ways to store vegetables without one.

This year, the weather turned very cool and wet in August, and we were afraid our Yukon Golds would sprout even earlier than normal. So we harvested them in mid-August – but we didn’t have room in our refrigerator to store them, as we had harvested over a bushel from about 35 square feet.  We ended up storing them in closed cardboard boxes in our basement. It wasn’t ideal conditions, as it was about 70 degrees and only 50% humidity, but they ended up storing much better than we had hoped.

Now that the weather is cooling off outside, we have transferred them to a Styrofoam cooler in our outdoor shed. I had a neighbor that successfully stored bushel baskets of potatoes in the crawl space under her house.  Don’t let the lack of ideal storage arrangements prevent you from growing more of your own food! 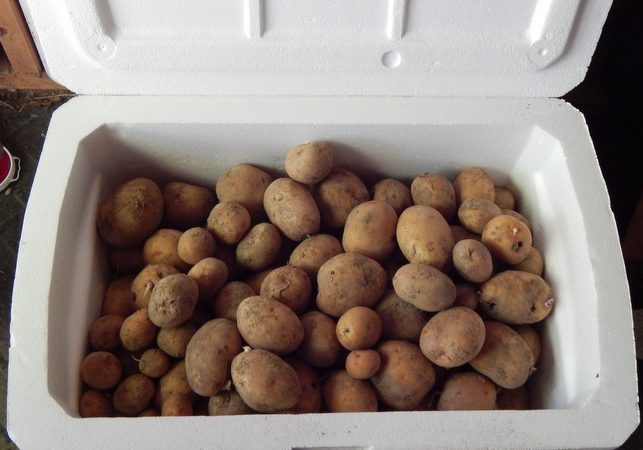 We have to be creative in how we store our winter vegetables, as we don’t have a root cellar. We often use a Styrofoam cooler like this one to store our potatoes, apples, or cabbages.

To learn more about storing winter vegetables, read How We Store Our Vegetables Without a Root Cellar.