Use Deeper Soil for Higher Yields

I know that Mel Bartholomew (of Square Foot Gardening) teaches that 6 inches of soil is deep enough to grow nearly any crop. However, it has been my experience that many plants simply don't thrive in shallow soil. If you seriously want to harvest the most amount of food that you can from a small garden bed, you need to have good soil at least 10-12 inches deep and not put a weed-barrier under the bed.

First of all, I'm NOT saying that you can't grow vegetables in shallow soil. Many salad crops, such as lettuce or carrots, grow just fine in 6 inch deep containers or garden beds. But other plants can become very stunted or produce a much smaller harvest than normal.

The first time I noticed stunted vegetable plants was when I started growing some vegetables in containers. I used my standard potting soil mix – which is Mel's mix (1/3 compost, 1/3 peat moss, 1/3 vermiculite), plus 2 cups of organic fertilizer blend and 1/3 cup of lime added to every 2 cubic feet of soil mix (about three 5-gallon buckets). This soil mix has worked very well for me when I've grown young vegetable seedlings and containers of flowering plants, and I've also used it successfully in a few small garden beds.

However, when I started to harvest vegetables grown in containers a few years ago, the first thing I noticed was how much smaller some of my crops grew. My beets and Swiss chard, in particular, only reached about 1/3 – 1/2 of their normal size. I was used to growing large, vigorous plants in my garden, and I was quite surprised at the size difference. So, I experimented with different containers and soil depths. 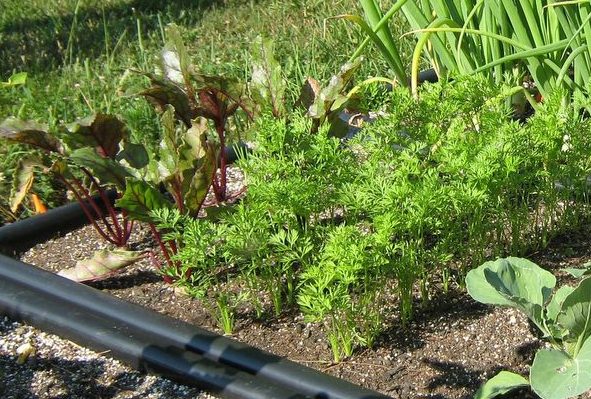 The young beets growing in the left side of this 8-inch deep container never grew more than about 60-70% larger than you see here. This is much smaller than my beets normally grow in deeper soil.

(fabric containers). I filled both containers with the same potting soil, watered them the same, and kept them in the same growing conditions (temperature and sunlight).

Mind you, this was not a formal scientific experiment. I didn't use controls, or exactly measure and weigh the results. I was just looking for any obvious differences, and I repeated this test again the next year.

The plants in the deep Smart Pots

container grew MUCH larger and more vigorously. Both containers had the same volume of soil, but the Smart Pot was twice as deep. Of course, the Smart Pots tend to air-prune the roots of plants growing in them – unlike the plastic growing trays. Air-pruning can produce a bushier, healthier root system for the plants, but I don't believe it alone is enough to account for the huge difference in growth. 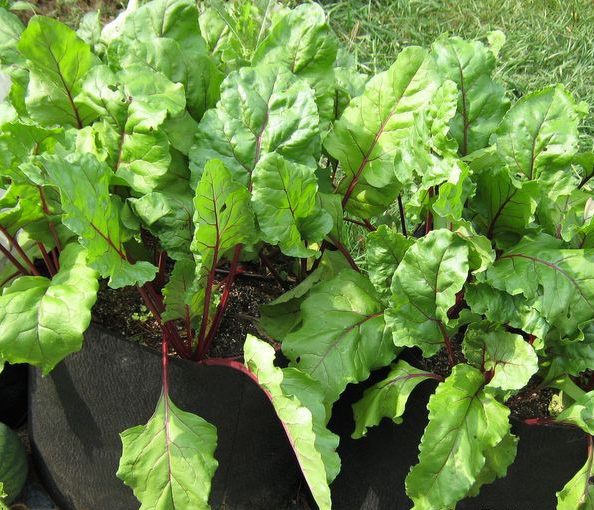 These beets, growing in 16″ deep Smart Pots, are much larger and more vigorous than the beets growing in the 8-inch deep containers – even using the same potting soil.

– one plant in each of my four containers. I grew the same squash in two 4′ x 4′ garden beds – one bed had 4 squash plants growing in it, and the other bed just had 2 plants.

Both of these beds had good topsoil at least 12 inches deep, with no weed barrier beneath them. The roots of these squash plants were able to grow very deeply into the soil, and even out beyond the beds – so each of the plants in the garden beds had access to several Smart Pot's worth of soil. All plants, including those in containers, were trained up on trellises.

To summarize this simply, the larger the volume of good soil that a plant has to grow in, the larger and more vigorously it can grow and the more food it can produce. You can end up actually harvesting less food per square foot when you crowd plants too closely together or give them less soil to grow in.

Many garden books recommend putting a weed-barrier underneath your garden beds. Unfortunately, this not only doesn't really offer good long-term control of invasive weeds, but it prevents your vegetables from spreading their roots as deeply and widely as possible into the soil.

The roots of most plants spread much farther and deeper than you might realize. Even carrot and beet roots can grow several feet deep, given decent soil.  Just because you might train a squash plant to grow up a 2 foot wide and 6 foot high trellis doesn't mean that it's roots are going to remain in the small 1′ x 2′ section of the garden bed directly below the trellis. The roots of a single squash plant can fill an entire 4′ x 4′ bed, and then out several feet into the soil under the paths surrounding the bed – IF there isn't a barrier in their way.

Weed-barrier doesn't prevent all roots from growing through it. It inhibits roots, but some will always penetrate it. As these roots grow, they expand and create larger, permanent holes in the barrier. That is why the barrier can't provide good, long-term control of invasive weeds. Unfortunately, this same barrier is keeping most of your vegetable roots restricted to a shallow layer of soil in your garden bed.

If I want to suffocate existing sod underneath a new garden bed, I'll put down 1-2 layers of cardboard under the bed. This will kill most plants, and will decompose in a few weeks and let both earthworms and plant roots travel between the garden bed and soil underneath. Before I put down the cardboard, I'll dig up the roots of any highly invasive plants.

The other major advantage to using deeper soil in your containers or garden beds is that it reduces the need for frequent watering. Garden soil and potting soil can only hold so much water for every inch of depth. Double the depth, and you double the amount of water that is available to the plants between rainfall or irrigation.

I don't know about you, but as much as I love my gardens, I also love to reduce my workload! And, with deeper soil, there are fewer times that I see my plants experience wilting from water stress.

After observing the major benefits from giving my plants much deeper soil to grow in, I now make sure my raised garden beds have at least 10-12 inches of good soil. I'll dig a hole in the ground where I want to put my garden, and check to see how deep the topsoil is. If I find only 3-4 inches of topsoil (pretty typical in many of our yards), then I'll create a 6-8 inch raised bed full of soil on top of the ground in order to give my plants the deep soil they need to thrive.

Conclusion: You can definitely grow a successful garden using 6 inches of good quality soil or Mel's mix. However, if you would like to increase the amount of food you can harvest from your small garden, and reduce how often you need to water your garden, try doubling the depth of your soil!